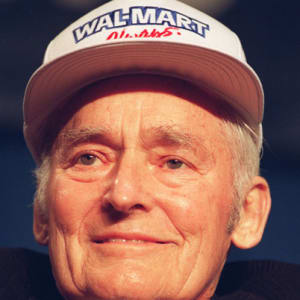 Sam Walton was an American businessman best known for founding the retail chain Wal-Mart, which grew to be the world’s largest corporation.

Sam Walton was born on March 29, 1918, in Kingfisher, Oklahoma. Walton opened the first Wal-Mart in 1962, after years in the retail management business. The discount chain expanded internationally over the next 30 years, growing into the world’s largest company by 2010. Walton stepped down as CEO in 1988, at the age of 70, but remained active in the company until his death in 1992.

A pioneering businessman who broke convention and showed that large discount stores could thrive in small, rural areas, Samuel Moore Walton was born March 29, 1918 in Kingfisher, Oklahoma. He was the first son of Thomas Walton, a banker, and his wife, Nancy Lee. Early in his life Walton and his family moved to Missouri, where he was raised. An able student and a good athlete, Walton quarterbacked his high school football team and was an Eagle Scout. Upon his graduation from Hickman High School in Columbia, Missouri, in 1936, his classmates named him "most versatile boy." After high school, Walton stayed close to home and enrolled at the University of Missouri in Columbia, where he graduated with a degree in economics in 1940.

Following college, Walton got his first real taste of the retail world when took a job in Des Moines with the J.C. Penney Company, which was still a relatively small retailer.After serving as an Army captain in an intelligence unit during World War II, Walton returned to private life in 1945 and used a $25,000 loan from his father-in-law to acquire his first store, a Ben Franklin franchise in Newport, Arkansas.

In less than two decades, Walton, working with his younger brother, James, came to own 15 Ben Franklin stores. But frustration over the management of the chain, in particular the decision to ignore Walton’s push to expand into rural communities, prompted him to strike out on his own.

In 1962 Walton opened his first Wal-Mart store in Rogers, Arkansas. Success was swift. By 1976 Wal-Mart was a publicly traded company with share value north of $176 million. By the early 1990s, Wal-Mart’s stock worth had jumped to $45 billion. In 1991 Wal-Mart surpassed Sears, Roebuck & Company to become the country’s largest retailer.

Walton was responsible for a lot of the success. His vision of a discount retail store in rural areas was accompanied by the founder’s hard-charging, demanding style. Walton, who often began his work days at 4:30 in the morning, expected results from those beneath him, and wasn’t afraid to change course or reshuffle his personnel if he didn’t like the numbers that came back to him.

Even in the grips of a recession, Walton’s stores proved successful. In 1991, as the country was mired in an economic downturn, Wal-Mart increased sales by more than 40 percent. But that success also made Wal-Mart a target, especially for small-town merchants and other residents who argued the giant chain was wiping out a community’s smaller stores and downtown retail. Walton, however, tried to meet those fears head-on, promising jobs and donations to local charities, which the company often delivered in some fashion.

An avid hunter and outdoorsman, Walton portrayed a humble image right up until his death. His vehicle of choice was a red 1985 Ford pickup. With his wife Helen, whom he married in 1943, he lived in the same house in Bentonville, Arkansas, since 1959. The couple had four children: S. Robson, John, James and Alice.

In 1985 Forbes magazine named Walton the wealthiest man in the United States, a declaration that seemed to irritate the businessman more than anything else. “All that hullabaloo about somebody’s net worth is just stupid, and it’s made my life a lot more complex and difficult,” he said.

Over that last several years of his life, Walton suffered from two types of cancer: hairy-cell leukemia and bone marrow cancer. He died of the latter on April 5, 1992, at the University of Arkansas Medical Sciences Hospital in Little Rock, Arkansas.

Just a month before his death, Walton was honored by President George H.W. Bush with the Presidential Medal of Freedom.