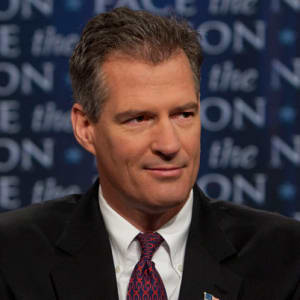 Scott Brown is a lawyer and politician who served as Massachusetts senator on the Republican ticket.

Born on September 12, 1959, in Kittery, Maine, Scott Brown was part of the National Guard and worked as a lawyer before serving in the Massachusetts legislature from the late 1990s. In 2010, he won the race for U.S. senator in a special election for Ted Kennedy's seat, but lost in 2012 to Democrat Elizabeth Warren. Brown has since resumed private practice and worked for FOX News.

Scott Philip Brown was born on September 12, 1959, in Kittery, Maine. Brown's parents divorced when he was very young, so he lived with his single mother and great-grandparents in Wakefield, Massachusetts, as the family often had difficulty making ends meet. He remained close to his father, C. Bruce Brown, who served on the Newburyport City Council. As a child, Brown often accompanied his father on statewide political campaigns.

Scott Brown graduated from Wakefield High School in 1977 and joined the Massachusetts Army National Guard at age 19, attending ROTC classes first at Northwestern University, and then Tufts University, where he earned a bachelor's degree in history with honors. He then pursued a law degree at Boston College Law School, receiving his J.D. in 1985. While at Boston College, the 22-year-old Brown also became known for his good looks when he won Cosmopolitan magazine's "America's Sexiest Man" contest. He was featured as a nude centerfold in the magazine, and in the accompanying interview article Scott described his patriotic tendencies and political ambitions. The appearance in the magazine, and its $1,000 fee, helped pay for law school. It also jump-started a long and lucrative part-time modeling career for Brown during the 1980s.

Brown entered politics in 1992 when he was elected assessor of Wrentham, Massachusetts. As an assessor, he specialized in calculating the value of property for tax purposes. It was at this time that he attests he caught the "political bug." In 1995, he was elected to the Wrentham Board of Selectmen (the executive arm of New England towns, like a town council). Then, in 1998, he successfully ran for Massachusetts House of Representatives for the 9th Norfolk District. He served for three terms in the position. Brown moved up the ladder in state politics when he won a special election to the State Senate to replace Democrat Cheryl Jacques in March 2004. He was reelected that November, and again in 2006, running without opposition each time.

In February 2007, Scott Brown created some controversy when he appeared at King Philip Regional High School in Wrentham during a debate on gay marriage. A group of high school students had created a Facebook page attacking Brown, where derogatory remarks were posted about Brown's daughter, Ayla. During his presentation, Brown defended himself and his daughter by reading profane comments that were posted to the site, as well as the names of the students who wrote them.

Brown's position on gay marriage has also been controversial; he once remarked that the decision by former Massachusetts State Senator Cheryl Jacques to have a baby with her domestic partner was "just not normal, in terms of what's normal in today's society." The comment caused a media clamor, forcing Brown to retract the statement days later. However, the incident wasn't enough to derail Brown's political rise to prominence. While in the state senate, he voted against the repeal of the state law that barred out-of-state gay couples from marrying in Massachusetts and later, voted for a constitutional amendment banning gay marriage, and opposed the repeal of the federal Defense of Marriage Act. During his career in the state legislature, he generally supported more conservative causes. However, prior to adopting a pro-life stance, he publicly affirmed his support for Roe v. Wade.

During his tenure in the Senate, Brown made his mark as an advocate for veterans' affairs. As a member of the Joint Committee on Veterans and Federal Affairs, he authored a 2007 law that put a check-box on state income tax forms to recognize soldiers who served in Iraq and Afghanistan. The motion helped inform veterans of services and benefits available in the state.

In September 2009, Scott Brown announced his candidacy for the U.S. Senate seat that had become vacant upon the death of Ted Kennedy, proclaiming that he would fulfill Massachusetts' need for an "independent thinker." The press described him as a candidate who didn't fall neatly into party lines and characterized him as "mainstream." In the general election, Brown faced Democratic nominee Attorney General Martha Coakley and independent Joseph L. Kennedy (no relation to the Kennedy family). Initially, Brown faced overwhelming odds, being a relative unknown and a Republican in a very Democratic state. But while Democrats far outnumber Republicans in Massachusetts, independents outnumber both parties combined. Brown capitalized on his reputation as a moderate, and gained an increasing amount of support at election time.

Brown won the election on January 19, 2010, by a 52-to-47 percent margin. He had performed well in Republican strongholds, and kept rival Coakley's margins down in many Democratic precincts. He was able to garner support from independent voters who had backed Democrats in the past, and were frustrated with various national issues, including high unemployment, Wall Street bailouts, exploding federal budget deficits and partisan wrangling over health-care reform.

More notably, Brown's election win marked the end of a more than 50-year Democratic stronghold on Massachusetts and stripped Democrats of the 60-seat supermajority it held in the Senate, which Democratic senators needed to overcome Republican filibusters. Following his election to the Senate, Brown maintained a low profile whenever possible. One of Brown's first congressional initiatives was voting for the Democrat-sponsored "jobs bill"; he was one of only five Republicans to support the motion, which was ultimately passed through the Senate.

Brown ran for re-election in 2012, losing his Senate seat to Democrat Elizabeth Warren, a former assistant to President Barack Obama, 54%-46%.