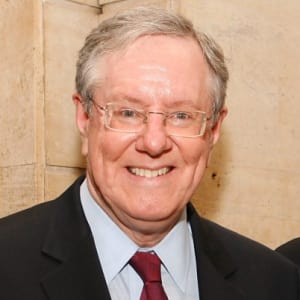 Business leader Steve Forbes, son of Malcolm Forbes, is chairman and editor-in-chief of Forbes Media. He also founded Empower America and is a Freedom Works board member.

Steve Forbes was born on July 18, 1947, in Morristown, New Jersey. In 1973, he began writing his own column for his father's magazine, Forbes. When his father died in 1990, Steve Forbes took over the magazine. In 1993, he founded Empower America. Forbes sought the Republican presidential nomination in 1996 and 2000, but dropped out both times. He became a Freedom Works board member in 2006.

Born Malcolm Stevenson Forbes Jr. on July 18, 1947, in Morristown, New Jersey, Steve Forbes grew up immersed in the worlds of publishing and politics. His grandfather, B.C. Forbes, was a journalist who founded Forbes magazine. His father, Malcolm Forbes, served as a state senator and had two unsuccessful bids for the New Jersey governorship, in 1953 and 1957.

The oldest of five children, Forbes spent much of his early life at the family's estate—called Timberfield—in Far Hills, New Jersey. He left home at the age of 14 to attend the Brooks School, a private boarding school in North Andover, Massachusetts. Following his graduation from Brooks in 1966, Forbes studied at Princeton University. There, he helmed his first magazine, serving as editor for a student publication called Business Today.

After earning a bachelor's degree in history in 1970, Forbes married his wife, Sabina (whom he'd met at a party in 1970). The couple had five daughters together. Forbes also became involved in the family business, eventually becoming a columnist for their leading publication. At Forbes, he showed a keen interest in economics and fiscal policy. Forbes proved to be a gifted economic forecaster, winning the Crystal Owl Award four times for his spot-on prognostications.

In 1993, Steve Forbes began his three-year stint as chairman of the board of Empower America, a conservative political reform organization formed by Jack Kemp, Bill Bennett and Jeane Kirkpatrick. Forbes wanted Kemp to run for the U.S. presidency, but he ended up throwing his own hat into the ring after Kemp decided not to enter the race.

Aspiring to the highest office in U.S. government, Forbes made his first bid for the presidency in 1996. Never having run for political office previously, he was both an underdog and an outsider in the fight for the Republican presidential nomination. Forbes used his own personal fortune to the tune of more than $37 million to help fund his campaign, which led to comparisons between him and Ross Perot. Running on a flat-tax platform, he ultimately failed to attract enough voters to win the nomination, and Bob Dole became the party's candidate.

In 2000, Forbes once again tried for the White House, spending roughly $32 million of his own cash to fuel his efforts to secure the Republican nomination. This time around, Forbes was thwarted by a popular Texas governor, George W. Bush.

Since his failed attempts at the presidency, Steve Forbes has remained an active force at his family's publishing business, and still serves as chairman and editor-in-chief of Forbes Media today. He also still writes for Forbes magazine, continuing to share his views through his editorial column, "Fact and Comment."

Additionally, Forbes has penned several books, including Why Free Markets Are Moral and Big Government Isn't (2012) and How Capitalism Will Save Us (2009)—both co-authored with Elizabeth Ames—and serves as a board member of the Ronald Reagan Presidential Foundation, the Heritage Foundation and the Foundation for Defense of Democracies.