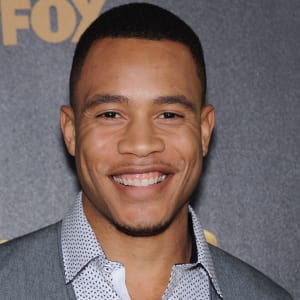 Actor Trai Byers stars in ‘Empire,’ one of TV’s hottest dramas. He also appeared in the 2014 critically acclaimed film ‘Selma.’


Hailing from Kansas City, Kansas, Trai Byers landed a spot on the daytime soap All My Children in 2011. The following year he co-starred in 90210, a remake of the popular teenage series. On the big screen, Byers appeared in two 2014 projects: the independent sports drama Jayhawkers and the critically acclaimed civil rights film Selma. He also started his run as Andre Lyon on the hit TV drama Empire later that year.


Born in 1983 in Kansas City, Kansas, actor Trai Byers moved around quite a bit as a kid as his father was in the U.S. Air Force, with the family spending time in the Philippines, among other locales. After earning an associate's degree at Andrew College and attending Prairie View A&M University, Byers went to University of Kansas, where he received a bachelor's degree in communications.

After college, Byers focused on performing. He was accepted into the prestigious Yale School of Drama where he earned a master's degree in acting. "One thing I learned particularly at Yale was how to work with others," Byers told the Kansas City Star. Byers graduated in 2011 and quickly launched his professional career with a role on daytime television.


Byers joined the cast of the popular daytime drama All My Children in 2011 as Mookie, an abusive ex-boyfriend. The following year, he made the leap to prime time with a role on 90210, playing a young man with a head for business. Byers soon moved to the big screen with a role in the independent sports film Jayhawkers, portraying musician Nathan Davis in the true-life story of racial integration and basketball at University of Kansas. (College basketball player Justin Wesley played Wilt Chamberlain in the film.)

Byers's character is pitted against his two younger brothers, Hakeem (Bryshere Gray) and Jamal (Jussie Smollett), for control of the family business after their father learns he's dying. Despite the eldest son's great business acumen, there's still tension between him and Lucious over Andre's mental health and interracial marriage. Playing a character with bipolar disorder was a new challenge for Byers, and he took time to study the condition. As he explained to Cosmopolitan magazine, he has some personal experience with the subject as well. "I have family members that are bipolar. One had a case recently that I witnessed, and it was very, very helpful."


In 2015, Byers and Empire costar Grace Gealey announced their engagement. A devout Christian, Byers shares his spiritual priorities on his Twitter page, writing "God first in all things."