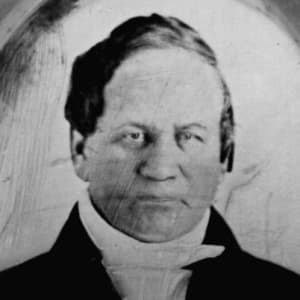 Alexander Lucius Twilight is the first African American to graduate from a U.S. college (1823) and the first black American to win election to public office, joining the Vermont Legislature in 1836.

Born on September 23, 1795, in Corinth, Vermont, Alexander Lucius Twilight is the first African American to graduate from a U.S. college, receiving his bachelor's degree from Middlebury College in 1823. Also a pioneer in Vermont politics, Twilight became the first African American to win election to public office in 1836, joining his home-state legislature. He died in Brownington, Vermont, on June 19, 1857.

Born on September 23, 1795 (though sources vary on the month and day of his birth, with some saying September 26 and others noting July 15), in Corinth, Vermont, where he also grew up, Alexander Lucius Twilight was one of six children born to Ichabod and Mary Twilight. The Twilights were one of the few African-American families living in the area at the time. According to the Old Stone House Museum's website, Ichabod Twilight served in the American Revolutionary War.

At an early age, Alexander Twilight went to work on a nearby farm, where he learned some of basics of reading, writing and arithmetic. At the age of 20, in 1815, he began his formal education at the Orange County Grammar School (also known as the Randolph Academy) in Randolph, Vermont. In 1821, Twilight enrolled at Middlebury College, located roughly 30 miles east of Randolph. Two years later, he made history when he became the first African American to graduate from a U.S. college, earning a bachelor's degree from Middlebury (1823).

After completing his degree, Twilight was offered a teaching position in Peru, New York, a small community located in the northeastern part of the state, serving in that role for several years afterward. While in Peru, he met Mercy Ladd Merrill, whom he married in 1826. Twilight also had a strong interest in religion, eventually receiving credentials to become a preacher.

Returning to his home state, Twilight tended congregations in Vergennes and Brownington. In 1829, he became principal of the Orleans County Grammar School in Brownington (later known as Brownington Academy), also designing and helping the school construct a granite building named Athenian Hall (now known as the Old Stone House Museum). The structure housed classrooms and served as a dormitory.

Also a pioneer in Vermont politics, Twilight made history once again in 1836 when he joined his home-state legislature, becoming the first African American to win election to public office. He continued to thrive in his varied roles, educating and preaching until the late 1840s. During this same time, Twilight developed conflicts with both his school and church that ultimately led him to resign from his posts. He went on to teach in Quebec, Canada, for several years.

In 1852, Alexander Twilight returned to Brownington to work as a minister and to run the academy. He gave up his church duties after only a year into his new role, but stayed on at the school until ill health forced his retirement in 1855. He died two years later, on June 19, 1857, in Brownington.