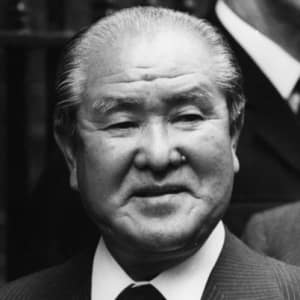 Zenko Suzuki is a Japanese politician and the 70th Prime Minister of Japan who resigned in 1982 due to factional strife within his party.

Japanese politician Zenko Suzuki trained at the Academy of Fisheries and joined the Liberal Party in 1948 which he helped merged with another right of center party to establish the Liberal Democratic Party (LDP). He was appointed as the 70th Prime Minister in 1980. His service was marred by strife within the LDP and deteriorating relations with the USA. He stepped down in 1982.

Japanese statesman and prime minister (1980-2), born in Yamada, NC Japan. He trained at the Academy of Fisheries, and in 1947 was elected to the lower house of the Diet as a Socialist Party deputy, but moved to the Liberal Party in 1949, and then to the conservative Liberal Democratic Party (LDP) (1955). During the 1960s and 1970s he held a succession of ministerial and Party posts. Following the death of his patron, Masayoshi Ohira (1910-80), he succeeded to the dual positions of LDP president and prime minister in 1980. His premiership was marred by factional strife within the LDP, deteriorating relations with the USA, and opposition to his defence policy. He stepped down in 1982, but remained an influential LDP faction leader.