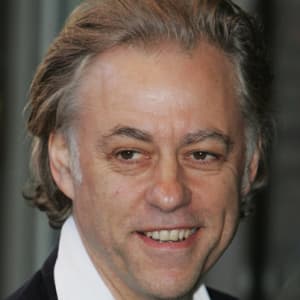 Bob Geldof is best known as the singer of the band the Boomtown Rats and for his political activism, particularly his anti-poverty efforts in Africa.

Born in Ireland in 1951, Bob Geldolf had a couple of hits with his band the Boomtown Rats in the 1980s, but it wasn't until Geldof formed the pop charity Band Aid trust in 1984 that he became widely known. The trust raised $8 million for Africa famine relief through the release of the record Do They Know It's Christmas?. In 1985, Live Aid concerts were held in London and Philadelphia, raising an additional $48 million.

Famed rock musician, author and philanthropist Bob Geldof was born Robert Frederick Xenon Geldof on October 5, 1951, in Dublin, Ireland. Geldof is best known as the singer of the punk band the Boomtown Rats and for his political activism—particularly his anti-poverty efforts in Africa—with the organizations Band Aid and Live Aid.

Geldof studied at Black Rock College in Ireland and worked in Canada as a pop journalist before returning home in 1975 to form the successful punk-rock group the Boomtown Rats (1975-86). The group had a couple of No. 1 hits, including the single "I Don't Like Mondays." Their 1980 album, Mondo Bongo, was a hit and became part of the infant MTV network's video rotation. In 1982, Geldof starred as "Pink" in the film Pink Floyd — The Wall.

Moved by television pictures of widespread suffering in famine-stricken Ethiopia, Geldof established the pop charity Band Aid trust in 1984, which raised $8 million for Africa famine relief through the release of the record Do They Know It's Christmas?. In 1985, simultaneous Live Aid charity concerts were held in London and Philadelphia and were transmitted by satellite throughout the world, raising an additional $48 million.

In 2004 Geldof was appointed a member of the newly launched Commission for Africa initiative, its task to produce new ideas for reducing poverty in the continent. In November of that year, a new "Band Aid" formed to record a second version of the single "Do They Know It's Christmas?" to raise funds for famine-stricken Darfur in western Sudan. The song topped the charts for several weeks, including over Christmas.

In July 2005, Geldof organized "Live 8" charity pop concerts that were timed to coincide with the G8 summit on world poverty, held in Perthshire, Scotland. In support of the Make Poverty History campaign, performances were broadcast in 10 cities around the world, including London and Philadelphia. That same year, Geldof presented Geldof in Africa for BBC 1 and wrote a book to accompany the series. At the 2005 Brit Awards, Geldof was honored with a Lifetime Achievement Award. Additionally, he received an honorary knighthood in 1986, and was awarded the freedom of the City of Dublin in 2005.

Bob Geldof has three daughters with rock journalist Paula Yates: Fifi Trixibelle Geldof (born on March 31, 1983), Peaches Honeyblossom Geldof (March 13, 1989 – April 7, 2014) and Pixie Geldof (born on September 17, 1990). In 1995, Paula Yates left Geldof for INXS rocker Michael Hutchence; the couple had a daughter, Tiger Lily. After Hutchence's suicide in 1997 and Yates's death from a drug overdose in 2000, Geldof became Tiger Lily's legal guardian. Peaches Geldof, 25, was found dead at her home in England on April 7, 2014. The BBC reported that toxicology reports showed heroin was in her system and that the drug likely played a role in her death. In July, a coroner confirmed her death was due to a heroin overdose.