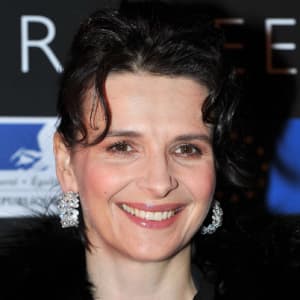 French actress Juliette Binoche is celebrated for her devotion to quality films and the intelligence she has brought to her complex roles.

Born in Paris in 1964, Juliette Binoche made her feature film debut in 1983 with Liberty Belle. Her performance in the 1988 film The Unbearable Lightness of Being thrust her into the international spotlight, and she was honored with an Academy Award in 1997 for her work in The English Patient. Despite her successes, the actress is known for generally shunning big budget fare to take on complex roles in independent productions, for which she has won numerous film festival awards.

Actress. Born March 9, 1964, in Paris, France. Juliette Binoche is of mixed French and Polish descent—her maternal grandparents were Polish intellectuals who had been imprisoned by the Nazis at Auschwitz during World War II. Her mother, Monique Stalens, was an actress and acting teacher, and her father, Jean-Marie Binoche, was an actor and director.

Binoche's parents separated when she was only two years old, and she and her sister, Marion, were sent to boarding school in the Paris suburbs. "We were not really a family at all," Binoche says. "We were always separate, always moving around." Embittered by her parents' divorce and already disinclined to focus on academics, Binoche struggled badly in school. "It was horrible," she recalls, "but I think it was probably partly what made me who I am. If you have everything, then you don't want to go on. It's the lacking that makes you search for something better."

It was this search for something better than real life that led Binoche, as a young teenager, into the alluring make-believe world of the theater. "Choosing to be in the theater was a way to put my roots down somewhere with other people," she says. "It was a way to choose a new family."

Binoche displayed uncanny natural acting talent, and at the age of 15 she and her sister left boarding school and rented a small apartment in Paris, where Binoche supported herself by landing starring roles in stage productions of Molière and Pirandello. Binoche gained admission into the prestigious French National Academy of Dramatic Arts in Paris, but quickly became frustrated with her fellow students' lack of commitment. "They were not behaving like actors responsible for their lives," she remembers. "I was already having to deal with cooking and shopping and making my own life with my sister, and I felt there was no time to lose."

After a couple of years' training at the National Academy, Binoche began receiving a flood of offers to appear in movies, and decided to leave school to pursue a professional full-time film career. She made her big screen debut before she turned 20, in the 1983 film Liberty Belle. Two years later she began to garner widespread attention with a pair of critically acclaimed features, Hail Mary and Rendez-vous, which won Best Direction at the Cannes Film Festival. Binoche then burst onto the international scene in the 1988 American film The Unbearable Lightness of Being, a screen adaptation of the novel by Czech writer Milan Kundera.

Despite her rising profile in the United States, Binoche turned down high-profile roles in Hollywood blockbusters such as Jurassic Park and Mission: Impossible to focus her career on French art films. She explains, "I have said no to Hollywood roles where I've been asked to play a secret agent—always small roles where they are seductive stereotypes." Instead, she chose to star in the highly acclaimed, if lower-grossing, The Lovers on the Bridge (1991), and later won the César Award for Best Actress for the 1992 film Damage. Binoche also starred in the Three Colors trilogy (1993-1994), winning a Best Actress trophy at the Venice Film Festival for her role in the first installment.

Binoche's international popularity and critical acclaim soared to new heights with her performance in director Anthony Minghella's film The English Patient (1996). Binoche portrayed Hana, a French-Canadian nurse looking after the critically wounded Hungarian geographer Laszlo Almásy in an abandoned monastery. The film won nine Academy Awards, including Binoche's Oscar for Best Supporting Actress. Following her performance in The English Patient, Binoche again retreated from the spotlight, appearing on stage in a 1997 London production of Naked and a 2000 Broadway production of Betrayal, as well as in several French films.

Binoche then returned to international prominence to display her considerable comedic gifts opposite Johnny Depp in the blockbuster comedy Chocolat (2000). She earned an Oscar nomination for Best Actress for her portrayal of Vianne, a woman who brings life to a conservative French village by opening a chocolate shop. Subsequent films included Jet Lag (2002) and Caché (2005), as well as the thriller Breaking and Entering (2006), in which the actress reunited with Minghella.

Binoche has continued to turn in acclaimed and successful performances, while remaining true to her commitment to high-quality projects. She starred in the French-Taiwanese film Flight of the Red Balloon (2007) as well as Certified Copy, for which she won Best Actress at the 2010 Cannes film festival. She went on to earn rave reviews for her gripping performance as the titular sculptor of Camille Claudel 1915 (2013), and then took a surprising turn by appearing in the 2014 remake of Godzilla. Among her credits from 2015 are featured roles in Nobody Wants the Night and The 33, about the 2010 Chilean mining disaster.

Binoche's personal and professional lives have always been deeply intertwined. She had a long-term relationship with Leos Carax, the director of Lovers on the Bridge; dated Olivier Martinez, her costar in The Horseman on the Roof; and had a daughter, Hana, by Benoît Magimel, whom she met while filming Les Enfants du Siècle in 1999. Binoche also has a son, Raphaël, with professional scuba diver André Halle. In addition, the actress dated Santiago Amigorena, an Argentinean screenwriter and director with whom she has worked on several occasions. Through it all, she has remained unmarried because, she says, she has struggled to find her perfect match. "You've got to search without searching and that is what's so difficult," Binoche says about love.

Known in France simply as "La Binoche," Juliette Binoche is widely considered the most successful and talented French actress of her generation. She sums up her philosophy on her vocation as such: "The law of acting for any actor is ups and downs. Sometimes you have wonderful roles, sometimes you have nothing. You have to accept it's like that. It's not fonctionnaire [civil servant] work. But it's true you have to say no to those roles you're not going to be nourished by. You have somehow to be a little fulfilled in it so that you can bring something out of yourself that is challenging, enlightening, creative. Otherwise you should do something else."