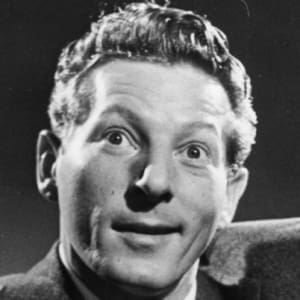 Actor and comedian Danny Kaye was enormously popular across stage, radio, TV and movie venues for his singing, dancing, impersonations and improvisations.

Entertainer Danny Kaye was born as David Daniel Kaminsky in Brooklyn, New York on January 18, 1911. According to his web site, Kaye's "actual year of birth was 1911, but the birthday he celebrated was 1913." Kaye was his parents' youngest child; he had two older brothers. His father, Jacob Kaminski, and his mother, Clara Nemerovky, were Ukrainian Jewish immigrants. Jacob, a former horse trainer, worked as a tailor while Kaye and his brothers were growing up.

When Kaye was 13 years old, he dropped out of high school to take a stab at show biz stardom. Partnered up with a guitarist friend, Kaye hit the road, but before long he abandoned the unsuccessful tour and went home to Brooklyn. There he worked a string of odd jobs–ranging from soda jerk to office clerk, failing miserably in most positions. After he made a costly error as an insurance appraiser and was fired on the spot, Kaye reconsidered forging a career in show business. "I became an entertainer not because I wanted to but because I was meant to," Kaye would later say of his seemingly inevitable career path.

While still a teen, Kaye found employment as a comedian and general entertainer in the Catskill Mountains. Working his way through the "Borscht Belt" of Jewish resort venues, Kaye left his audiences roaring with laughter. In 1933, Kaye was invited to join a vaudeville act called the "Three Terpsichoreans." He switched from his given name, David Daniel Kaminsky, to his stage name, Danny Kaye, around the time that the group toured Asia.

Throughout the 1930s, Kaye persistently worked to make a name for himself in show business, while collaborating with song writer-composer Sylvia Fine. In 1939, he got his big break with a Broadway debut in The Straw Hat Review. Later that year, he achieved his goal of stardom with a crowd-pleasing performance of the silly, nonsensical song "Tchaikovsky" in Lady in the Dark. It was a time of great milestones for Kaye; in 1940, he married Sylvia Fine and she became his manager.

During WWII, Kaye supported the troops by performing overseas, in New York nightclubs and on Broadway. In 1944, he accepted a movie contract with Samuel Goldwyn and subsequently appeared in a string of popular Technicolor musicals, including the hit film The Secret Life of Walter Mitty. He is also starred on his own wildly popular variety show on CBS Radio from 1945 to 1946.

Kaye made more movies in the 1950s, including the seasonal classic White Christmas (1954) with Bing Crosby and Rosemary Clooney, but his popularity as a film star gradually began to taper off as the decade wound down. In the 1960s, he transitioned to the small screen with TV specials and, eventually, his own series, The Danny Kaye Show, which ran from 1963 to 1967. Always a social activist, Kaye served as ambassador at large for the United Nations Children's Fund in the 1950s. During the 1970s, as his show biz career was lagging, he devoted most of his time to charitable causes.

In the early 1980s, Kaye made occasional TV appearances, including on sitcoms like The Cosby Show, and a dramatic made-for-TV movie about a holocaust survivor, Skokie (1981). Skokie marked one of only a few dramatic roles that the comedic performer played during his lifetime.

Kaye died of heart failure in Los Angeles, California on March 3, 1987. Through his lively singing, dancing, impersonations and improvisations, Kaye achieved enormous popularity in equal parts on the stage, across radio waves, and on both TV and movie screens.