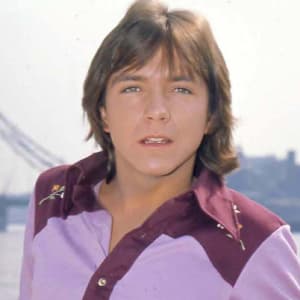 David Cassidy was a singer and actor best known for his starring role on the 1970s musical television series ‘The Partridge Family.’

Who Was David Cassidy?

Born in New York City in 1950, David Cassidy rose to fame as the heartthrob of the 1970s musical TV series The Partridge Family. In addition to being popular on television, the fictional family scored radio hits with songs such as "I Think I Love You." After the show's conclusion, Cassidy continued to perform in concerts and with theater productions, and in later years he opened up about his struggles with substance abuse. He died on November 21, 2017, from liver failure.

Singer, actor and TV star David Cassidy was born on April 12, 1950, in New York City. Son of actor and singer Jack Cassidy and actress Evelyn Ward, Cassidy built his own career as an entertainer, most notably as one of the stars of the musical television series The Partridge Family in the 1970s. Growing up, he was surrounded by show business. His parents divorced when he was a child, and his father married actress and singer Shirley Jones in 1956.

Jones and Cassidy went on to play mother and son on The Partridge Family, which debuted in the fall of 1970. Danny Bonaduce and Susan Dey were also key members of the cast. In addition to being popular on television, the fictional family scored several radio hits, such as "I Think I Love You," which featured Cassidy on lead vocals. He played the family group's young heartthrob in the series, and became one of the decade's biggest teen idols in real life, as well. Releasing several hit albums, Cassidy had a successful career as a solo artist for several years.

By the mid-1970s, however, Cassidy's teen fan base had moved on. He landed his own television drama, David Cassidy – Man Undercover, in 1978, but it only lasted for one season. After the series ended, Cassidy found work in theater, performing in regional and touring productions. He then had a successful run in Las Vegas, beginning with the show EFX in 1996. With his 1999 Vegas production, The Rat Pack Is Back!, Cassidy served as co-writer and co-producer. The following year, he starred in At the Copa, which he composed with his third wife, Sue Shifrin-Cassidy.

Cassidy shared his life experiences with readers in his 2007 autobiography, Could It Be Forever? My Story. He continued to tour, performing live for audiences in the United States and abroad. He also returned to television in the comedy series entitled Ruby and the Rockits, developed and produced by his brother Shaun and co-starring his brother Patrick, in 2009. In 2013, he made a guest appearance on CSI: Crime Scene Investigation.

Cassidy had two children. From his relationship with model Sherry Williams, he fathered a daughter named Katie, who is also an actress and singer. After marrying his third wife in 1991, the two had a son, Beau. The couple finalized their divorce in 2016.

Cassidy made his struggles with alcohol and substance abuse public in 2008. He was charged with a series of DUI offenses and entered rehab in 2014. In 2015, Cassidy filed for bankruptcy, and in 2017, he revealed to People magazine that he was suffering from dementia, a disease his grandfather and mother also battled. "I was in denial, but a part of me always knew this was coming," he told People.

Cassidy also announced that he would stop touring. “I want to focus on what I am, who I am and how I’ve been without any distractions,” he said. “I want to love. I want to enjoy life.”

On November 18, 2017, news surfaced that Cassidy was in critical condition at a hospital in Fort Lauderdale, Florida. He died three days later, on November 21, from liver failure. His publicist released a statement from his family which said: “David died surrounded by those he loved, with joy in his heart and free from the pain that had gripped him for so long."

In December, it was revealed that Cassidy had left the majority of his estate to his son, Beau, as well as music memorabilia to his three half-siblings. His will specified that no benefits would be provided to his daughter, Katie, with whom he had an up-and-down relationship, though she did appear at her father's bedside during his final days.

In the Biography documentary special, David Cassidy: The Last Session, Cassidy revealed that he did not suffer from dementia, but rather, liver disease. “There is no sign of me having dementia at this stage of my life. It was complete alcohol poisoning," he confessed to a producer just days before his death. “The fact is that I lied about my drinking. I did this to myself to cover up the sadness and the emptiness.”