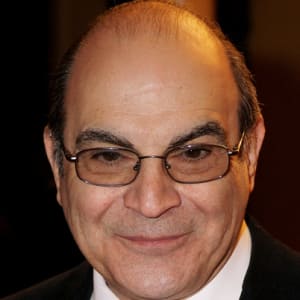 Though his best-known work has been as Poirot, David Suchet earned acclaim for his roles in the miniseries Blott on the Landscape and The Life of Freud. He also appeared as domineering Hollywood studio head Louis B. Mayer in the well-received HBO feature RKO 281 (1999), about the making of Orson Welles' Citizen Kane. He has also appeared in numerous Hollywood films and as Poirot on a PBS series.

Actor David Suchet was born on May 2, 1946, in London, England. Suchet is best known to audiences for his definitive portrayal of Hercule Poirot, the Belgian detective created by the legendary mystery author Agatha Christie, in a number of international television productions.

An alumnus of the London Academy of Music and Dramatic Arts, Suchet began an accomplished career as a stage actor with the Royal Shakespeare Company in 1973, playing Tybalt in Romeo and Juliet. He starred in a number of acclaimed productions in London and abroad, winning a Society of West End Theatres (SWET) Award for Best Actor for his performance as Shylock in The Merchant of Venice (1978). Suchet made his American stage debut in 1975 in a production of King Lear.

Suchet later reprised the role in two original feature-length productions by A&E, Poirot: Lord Edgeware Dies (1999) and Poirot: The Murder of Roger Ackroyd (2000). He was joined in the Poirot series by recurring costars Hugh Fraser, as Captain Arthur Hastings, Philip Jackson, as Chief Inspector James Japp and Pauline Moran, as Miss Felicity Lemon. In all, Suchet starred in the lead through its 2013 season.

Though his best-known television work has been as Poirot, Suchet earned a considerable amount of acclaim for his roles in the miniseries Blott on the Landscape (1985) and The Life of Freud (1986), as well as the television movies A Song for Europe and The Last Innocent Man. Recently, he appeared as the domineering Hollywood studio head Louis B. Mayer in the well received Home Box Office (HBO) feature RKO 281 (1999), about the making of Orson Welles' Citizen Kane.

On stage, Suchet's compelling portrayal of George in a 1997 production of Who's Afraid of Virginia Woolf? won him a London Critics' Circle Award for Best Actor. He also turned in starring performance in such acclaimed productions as Timon of Athens (1991), and David Mamet's Oleanna (1993). He earned a Tony nomination for Best Actor for his role as Salieri in the Broadway revival of Peter Hall's Amadeus (1999).

Suchet has two children, Robert and Katherine. He and his wife, Sheila, have been married since 1976.