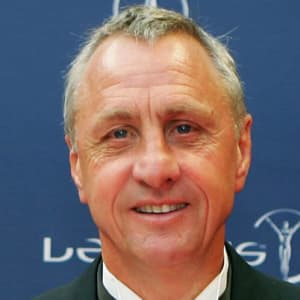 Johan Cruyff was born on April 25, 1947, in Amsterdam, Netherlands. The centerpiece of the Dutch "Total Football" strategy, Cruyff was the first three-time European Player of the Year winner in a career that brought him from the Netherlands to Spain to the United States. A successful manager after his playing career ended, he was named European player of the 20th century in a prestigious poll.

Athlete Hendrik Johannes Cruyff was born on April 25, 1947, in Amsterdam, Netherlands. Growing up near the stadium of AFC Ajax, the local soccer club, the youngster caught the attention of team officials and joined its youth division at age 10. His mother also began working for the club two years later, after her husband died of a heart attack.

Cruyff made his senior debut in 1964 for an Ajax team on the rise. At the time, manager Rinus Michels was preaching his "Total Football" strategy, in which players seamlessly rotated between positions on the field. The multitalented Cryuff proved perfect for this method; nominally a center-forward, he had the speed and intelligence to thrive wherever positioned. Between 1966 and 1973, Ajax won six Dutch championships, three European Cups and two UEFA Super Cups. In 1971, Cryuff became the first Dutch player to win the Ballon d'Or Award as European Footballer of the Year.

Cruyff transferred to FC Barcelona after the start of the 1973-'74 season and quickly made new fans by leading his team to a 5-0 thrashing of archrival Real Madrid en route to a league title. He won another Ballon d'Or Award halfway through his first season in Spain, and became the first three-time winner the following year.

In 1974, Cruyff made his only World Cup appearance for the Netherlands. Although they lost in the final to West Germany, the host country, the Dutch playmaker was named the top player of the tournament. Altogether, he scored 33 goals in 48 international appearances.

Cruyff announced his retirement after the 1978 season, but he resumed his career in the United States, playing for the Los Angeles Aztecs in 1979-'80 and the Washington Diplomats the following year. After an injury-plagued season with the Spanish club Levante UD, he finished his career in the Netherlands with two more successful seasons with Ajax and one with Feyenoord.

Despite lacking formal coaching qualifications, Cryuff took over as manager of Ajax in 1985 and led the team to two Dutch Cups and a UEFA Cup Winner's Cup in three years.

His return to Barcelona in 1988 resulted in one of the most successful stretches in club history. From 1989 through 1994, the Cruyff-led "Dream Team" won four league titles, three Super Cups, a European Cup and a Copa Del Ray title. However, the pressure to win in Barcelona was intense; Cruyff underwent double heart bypass surgery in 1991, and he was fired at the end of the 1996 season after failing to win any significant titles over a two-year stretch.

Cruyff took the time to tend to his business interests, which included running the Johan Cruyff Foundation and the Johan Cruyff Institute. The end of the decade also brought more personal recognition. He was voted European Player of the Century in an election held by the International Federation of Football History & Statistics, and finished second behind Brazilian legend Pelé in its World Player of the Century poll.

In 2009, the soccer great returned to the sidelines as coach of the Catalonia national team. He became an advisor for the Mexican club Chivas Guadalajara in February 2012, but was fired in December after the club's disappointing season. One month later, he stepped down as Catalonia's coach.

Cruyff was an advisor for Ajax, and an outspoken source for things related to the sport he once so easily mastered.

Although he gave up smoking after his heart surgery in 1991, Cruyff was diagnosed with lung cancer in October 2015. On March 24, 2016, he died peacefully in Barcelona from the disease.

Tributes poured in as the news became public. Said former German star and current U.S. men's team coach Jurgen Klinsmann: "Very sad news about the death of legend Johan Cruyff. What an amazing player, coach, teacher and person he was."