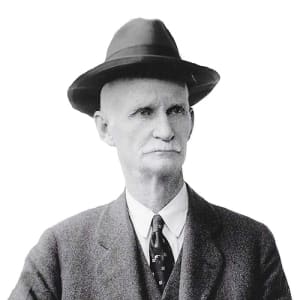 John Browning transformed the firearms industry with his innovative designs for sporting rifles, handguns and machine guns. Many of his creations remain in use after

Who Was John Browning?


Born in Odgen, Utah, in 1855, John Browning learned the trade of gunmaking from his father. Beginning with his creation of what became the Winchester Model 1885 rifle, his innovations

transformed the business, as he either invented or introduced new versions of repeating, automatic and high-capacity firearms that proved popular among both civilians and the military.

Browning spent much of his later years in Belgium, where he forged a relationship with the firearms company FN Herstal, and died in that country in 1926.

In 1879, Browning received his first patent, for a single-shot rifle. Four years later, he received a visit from T. G. Bennett, vice president and general manager of the Winchester Repeating Arms

Company, marking the start of a 19-year collaboration between Browning and Winchester. His first patent became the basis for the Winchester 1885, reputed to have one of

the strongest actions of the time.

In 1893, Browning presented Winchester with a lever-action rifle tailor-made for the new 30-30 smokeless cartridge. While not his first lever-action design, it became the standard bearer as a

Browning introduced the first pump-action (or slide-action) shotgun in 1893, though it was unable to process the smokeless cartridges that were becoming popular. He made the adjustment for

the Model 1897, which also featured the now standard "takedown" design that allows the barrel to be removed. The 1897 later proved a highly effective weapon for Allied forces during WWI.

The Auto-5, which marked one of the first collaborations between Browning and Fabrique Nationale of Belgium, became the first successfully mass-produced semi-automatic

shotgun in the early 20th century. It was based on a Browning patent in which the barrel and bolt recoil together following a shot, with the bolt remaining behind to eject the spent shell before moving forward to
chamber a new one.

Also known by other names, including the Colt 45, the M1911 is a short-recoil, single-action hammer-fired pistol. It served as the U.S. military’s standard sidearm from 1911 until 1985, while

Introduced by FN Herstal in 1925, the B25 was the world's first over/under shotgun. Browning was working on an improved over/under prototype when he passed away the following year, his

design eventually leading to the production of the Browning Superposed.


Along with his popular rifles for sporting and personal use, Browning developed high-capacity weaponry for military combat. One of his first creations for such use, the gas-operated machine gun M1895, surfaced in the Spanish-American War of 1898 and China's Boxer Rebellion shortly afterward.

The M1918 Browning Automatic Rifle appeared toward the end of WWI, its variations receiving more extensive use during WWII and the Korean War. Additionally, the M1919 Browning, a short-recoil-operated

Browning's designs were also used to create the M2 Browning, or "Ma Deuce," an 80-plus-pound air-cooled machine gun. While not produced until the 1930s, after Browning's death, it

became one of his most renowned military contributions, figuring into numerous major global conflicts in the decades that followed.

Early Years and Interest in Guns


John Moses Browning was born on January 23, 1855, in Ogden, Utah. His father, Jonathan, was a businessman, civil servant and gunsmith, the latter activity capturing the attention of his children.

Spending most of his time in his father's gun shop, John Browning cobbled together his first gun at age 10 from spare parts. He attended school until around age 15, when the head instructor,

who recognized the boy's primary interest, told him not to bother coming back.


In 1880, Browning and his brothers opened the early version of the Browning Arms Company, then known as J.M. Browning and Bro. Guns, Pistols, Amunition & Fishing Tackle, in Ogden, Utah.

Following his early collaborations with the Connecticut-based Winchester Repeating Arms, Browning expanded his business overseas in 1897 by authorizing Fabrique Nationale of Herstal,

In early 1902, Browning embarked on the first of approximately 60 voyages to Belgium, marking the transition to the European country as a base of operations. In 1977, FN

Herstal purchased Browning Arms outright, and today the company's firearms are generally produced in Belgium, Portugal, Japan and the U.S.


In 1879, Browning married Rachel Teresa Child, with whom he would have 10 children. His son Val later took over the family business,

A devout Mormon, Browning spent the late 1880s fulfilling his missionary service. Otherwise, he remained almost singularly devoted to his craft. Despite not being extensively schooled, he was

known to be highly intelligent, even learning French so as to be able to converse with factory workers in Belgium.

In 1914, King Albert of Belgium presented Browning with the Cross of Knighthood of the Order of Leopold for his contributions
to the city's firearms industry.


On November 26, 1926, John Browning died of heart failure in Liège, Belgium, reportedly while hard at work on one of his guns. Over the course of his life, he designed more than 80 military

and sporting arms, racking up 100-plus patents along the way.

Browning's innovations fueled the creation of many firearms associated with the American West, with Colt, Remington and Savage joining Winchester as companies that manufactured models

based on his designs. Regular production of his most popular guns endured for decades, with many remaining available for purchase today.

In 1952, a life-size memorial plaque was dedicated to Browning in Liège. In 1964, a photographic collection of his firearms was compiled for the first edition of his seminal biography, John M.

Enthusiasts can also see some of the legendary gunmaker's original models at the John M. Browning Firearms Museum, located in his birthtown at Ogden Union Station in Utah.