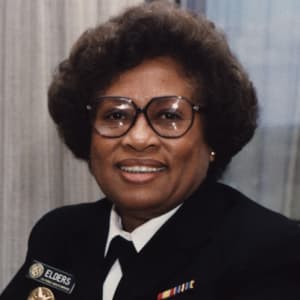 Joycelyn Elders became the first African-American United States Surgeon General in 1993 and only the second woman to hold the position.

Who Is Joycelyn Elders?

Joycelyn Elders was born on August 13, 1933 in Schaal, Arkansas. She was the daughter of sharecroppers but despite growing up in poverty, she graduated as valedictorian of her high school class and became the first in her family to attend college, the first person in the state of Arkansas to become board certified in pediatric endocrinology, and the first African-American public health administrator. In 1993, she became the 15th United States Surgeon General, making her the first African American and only the second woman to hold the position. Her controversial opinions about sexual health, including her U.N. conference statements regarding masturbation, caused great controversy, and ultimately led to her forced resignation. Elders is currently a professor emerita of pediatrics at the University of Arkansas School of Medicine and participates in numerous public speaking events promoting the legalization of marijuana and improvements to sexual education and public health.

While obtaining her medical degree from the University of Arkansas and giving physical examinations to the local high school basketball team, she met her husband, Oliver Elders, who was the basketball coach. Within two months, the couple married in 1960. They have two sons, Eric, born in 1963, and Kevin, born in 1965.

In September 1993, then-president Bill Clinton appointed Elders as the 15th United States Surgeon General, making her the first African American and only the second woman (following Antonia Novello) to hold the position. During her brief time as U.S. Surgeon General, she continued her open, frank, and often controversial crusades for improving sexual health education. Elders also helped develop the Office of Adolescent Health, which is now part of the Department of Health and Human Services. She advocated for increased access to health care and assistance for drug and alcohol abuse to her list of major concerns as well as the legalization of marijuana and other drugs. On these fronts and others, Elders was ahead of the curve on many public health issues that we have seen come to fruition today.

During her early work as a physician and pediatric endocrinologist, Elders was treating adolescents with juvenile diabetes when she began to take notice of the extreme dangers of early pregnancy for diabetic girls. Elders then began teaching her young patients about the importance pregnancy prevention, providing them with birth control and condoms. Throughout the next several decades, she published well over a hundred papers related to juvenile diabetes and sexual behavior and dedicated her life to public health and access to sexual education.

In 1987, then-governor Bill Clinton appointed Elders as Director of the Arkansas Department of Health, making her the first African-American woman to hold this position. Always an advocate for adolescent health and responsible decision-making, Elders was branded a “rabble rouser” by president of the Arkansas Medical Society due to her controversial opinions on sexual education and birth control. She was even given the nickname the “condom queen” because she kept a “condom tree” on her government desk. During her time in office, she successfully reduced teen pregnancy, expanded the availability of HIV services, and worked hard to promote sex education. In 1992, she was elected President of the Association of State and Territorial Health Officers and a year later, appointed as U.S. Surgeon General.

Elders is the recipient of numerous awards including the Woman of Distinction Award from Worthen Bank, the Arkansas Democrat’s Woman of the Year, the National Governor’s Association Distinguished Service Award, the American Medical Association’s Dr. Nathan Davis Award, the De Lee Humanitarian Award, the National Coalition of 100 Black Women’s Candace Award for Health Science, and the Career Development Award from the National Institute of Health. Elders was also featured in the Changing the Face of Medicine exhibition, which honors the lives and accomplishments of women in medicine, and is featured in the Arkansas Women’s Hall of Fame.

Elders currently participates in numerous public speaking events promoting the legalization of marijuana and improvements to sexual education and public health. Elders is also active in fight for racial equality in medicine.

Elders was the first in her family to attend college and she did so at age 15 on an earned four-year scholarship with assistance from her brothers and sisters who picked extra cotton to help pay the $3.83 bus fare she needed to get to school every day. In 1952, she received a B.S. in Biology from Philander Smith College in Little Rock, Arkansas. Her original plan was to become a lab technician but after hearing a speech by Edith Irby Jones, the first African-American student at the University of Arkansas School of Medicine, Elders — who hadn’t even seen a doctor until she went to college — decided she wanted to become a physician “to improve the lives of children.”

Elders went on to work briefly as a nurse’s aide at a Veterans Administration hospital in Milwaukee and then joined the U.S. Army’s Women's Medical Specialist Corps in 1953. She was the only African-American person in her class at Brooke Army Medical Center at Fort Sam Houston in San Antonio, Texas. She was stationed at Letterman Army Hospital in San Francisco, treating wounded soldiers returning home from the Korean War. In April 1954, Elders was licensed as a physical therapist and transferred to Fitzsimmons Hospital in Denver where she treated President Dwight D. Eisenhower after his 1955 heart attack.

Discharged from the U.S. Army in 1956, Elders went on to attend the University of Arkansas Medical School with assistance from the G.I. Bill. As 1 of 3 African Americans at the time of her entry into medical school, Elders was not allowed to eat in the “whites only” cafeteria. Despite the systematic racism she experienced, Elders obtained her M.D. in 1960 and M.S. in Biochemistry in 1967. In 1978, Elders became the first person in the state of Arkansas to receive board certification as a pediatric endocrinologist. Dr. Elders graduated from the University of Arkansas Medical School and then became its first African-American resident, its first African-American chief resident, and finally its first African-American professor. Elders worked at the University of Arkansas School of Medicine as an assistant, associate, and full professor of pediatrics from the 1960s to 1987 and later returned as a professor emerita.

Elders was born Minnie Lee Jones on August 13, 1933 in Schaal, Arkansas. She was the daughter of sharecroppers, Haller Reed and Curtis Jones and the eldest of eight children. The family lived in poverty, sometimes without plumbing and electricity. Throughout her childhood, she and her siblings worked the cotton fields with their parents and helped with other farming tasks. Even so, education was important to her family. One of Elders' earliest memories is being taught to read by her mother, who had an eighth grade education, which was quite extraordinary for an African-American woman at that time. Elders first attended Bright Star Elementary, a segregated one-room school 13 miles from her home. A gifted child, Elders later transferred to Howard County Training School in Tollette, Arkansas and graduated as its valedictorian at age 15, earning her a full tuition scholarship. She changed her name to Minnie Joycelyn Lee in college and but later stopped using the name “Minnie,” which was her grandmother’s name.

Elders told her life story in the autobiography, From Sharecropper's Daughter to Surgeon General of the United States of America (1997).