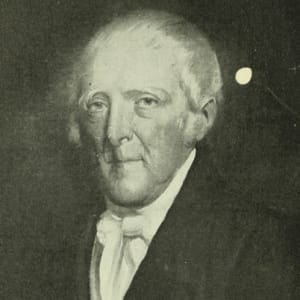 American inventor John Stevens contributed to the development of steamboat travel and helped create the railway system in the United States.

John Stevens was born in New York City on June 26, 1749. After serving in the Revolutionary War, Stevens began making innovations to early steamboat engines, in the process initiating U.S. patent laws. He then turned his attention to steam-powered locomotives and helped start the railroad system in the United States. Stevens was 88 when he died in Hoboken, New Jersey, on March 6, 1838.

John Stevens III was born in New York City on June 26, 1749. His parents were John and Elizabeth (née Alexander) Stevens. Stevens grew up as the scion of a wealthy family with significant political connections; he went on to attend King’s College in New York City (now Columbia University), graduating in 1768.

Stevens trained as a lawyer and became a member of the bar in New York. In 1776, he joined the Revolutionary War effort as a captain in George Washington’s army, and was soon promoted to colonel. During the war, Stevens also held the office of treasurer of New Jersey, helping to fill the state's coffers by collecting tax revenue.

In 1784—after the fight for independence had been won—Stevens bought a large parcel of land called "William Bayard's farm at Hoebuck" at public auction. The area would become the city of Hoboken, New Jersey, and its waterfront was one of the locations where Stevens' steamships would travel.

By the late 1780s, Stevens was enthusiastic about steam navigation. Building on the work of American steamboat pioneers James Rumsey and John Fitch, Stevens designed his own versions of boilers and engines. When it became apparent that his designs required patent protection, Stevens pressed the U.S. Congress to institute the Patent Law of 1790.

Stevens continued to work on his own ship, the Phoenix, which launched in 1808. The next year, the Phoenix made history when it traveled to Philadelphia, Pennsylvania—part of the journey was by sea, making it the first successful ocean voyage for a steamboat. Stevens also had a commercial ferry license for service between Hoboken and New York City; when a steamboat took over the route it was likely the world's first commercial steam ferry.

The potential of railway travel by steam-powered locomotive also captured Stevens' attention. The New Jersey state legislature gave Stevens the country’s first railroad charter in 1815. Ten years later, Stevens successfully operated a steam locomotive that ran on a circular track at his Hoboken estate—it was the first such train to be constructed in the United States.

Stevens died in Hoboken on March 6, 1838, at the age of 88. Railway fever was on the rise, and Stevens had been able to see his vision realized in the Camden & Amboy Railroad & Transportation Company, which had been established in 1830 under the direction of two of his sons: Robert Livingston Stevens and Edwin Augustus Stevens.

Stevens made important contributions to steamboats, American railroads and the U.S. patent system. The family name also lives on in Hoboken's Stevens Institute of Technology, which was founded with a bequest from Stevens' son Edwin.