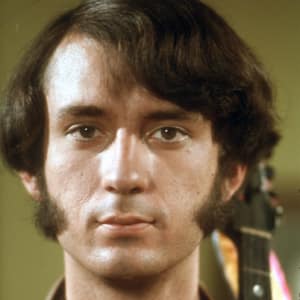 Michael Nesmith rose to fame as a member of the Monkees, a made-for-television group that turned into a real rock success story.

Born in Texas in 1942, Nesmith served in the U.S. Air Force before pursuing a career in music. He signed on to become a member of the Monkees, a television rock group, in the mid-1960s. The Monkees enjoyed tremendous success on the pop charts. After he left the group in 1970s, Nesmith pursued solo projects. He has occasionally reunited with his Monkees bandmates over the years.

Michael Nesmith was born on December 30, 1942 in Houston, Texas. His parents had divorced when he was only 3 years old and he and his mother Bette moved to Dallas. Nesmith attended Thomas Jefferson High School, where he performed in musicals and in the school's choir. During his high school years, Nesmith's mother patented and started marketing her invention, a correction fluid called Liquid Paper, which became a huge success.

After two years in the U.S. Air Force, Nesmith went to San Antonio College. He developed a passion for folk music and started performing and recording his own compositions. In the mid-1960s, Nesmith moved to Los Angeles to advance his career.

In 1965, Michael Nesmith won a role on a new television series about a rock group modeled after the Beatles. The Monkees, which also featured Davy Jones, Peter Tork, and Mickey Dolenz, debuted in September 1966, and this made-up boy band developed a real following.

The Monkees' popularity soon translated into pop-chart success. They reached the No. 1 spot with “I’m a Believer” and “Last Train to Clarksville.” The group sold millions of albums, but they struggled with their reputation as a manufactured act. Nesmith and the other band members began to take more creative control with 1967's Headquarters, which featured numerous songs penned by the quartet. They also played many of the instruments for the recording as well.

The Monkees went off the air in 1968, the same year as their only feature film, Head, premiered to poor reviews and box office results. Tork soon left the group, but Nesmith and the others made one more album together as the Monkees. Over the years, Nesmith has occasionally reunited with his former bandmates, most notably for 1996’s Justus, which featured all four original members.

Outside of the Monkees, Nesmith has enjoyed some success as a solo artist and songwriter. He penned the 1968 hit, "Different Drum," for the Stone Poneys and then scored two popular singles of his own in 1970: "Joanne" and "Silver Moon." While chart success has since eluded him, Nesmith has continued to produce new albums over the years, including 1972's Tantamount to Treason with the Second National Band.

Nesmith has also engaged in other creative pursuits in his post-Monkees life. He was an important player in the early days of music videos, creating a series for Nickelodeon called Popclips that provided the inspiration for the MTV cable channel. Nesmith won the 1981 Grammy for Video of the Year for his song "Elephant Parts."

In addition to music, Nesmith has produced several feature films, including 1984's Repo Man and 1988's Tapeheads. He added another title to his credit in the 1990s: author. Nesmith published his first novel, The Long Sandy Hair of Neftoon Zamora, in 1998.

In recent years, Nesmith has largely stayed out of the public eye. He lives a quiet life, reportedly in Carmel, California. Nesmith hasn't abandoned his great passion, however. He continues to work on his own music and with other musicians. Nesmith recently produced a track for Carolyn Wonderland's album Peace Meal.