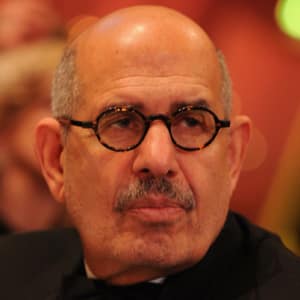 Born in Egypt, Mohamed ElBaradei is a Nobel Peace Prize-winning leader known for his pro-democratic views and diplomatic policies on nuclear disarmament.

Mohamed ElBaradei was born on June 17, 1942, in Cairo, Egypt, later becoming a specialist in global law and heading the International Atomic Energy Agency, during which time he earned the 2005 Nobel Peace Prize for his work in nuclear disarmament. He returned to his home country and protested the regime of Hosni Mubarak, and has also been seen as a leading figure after the ouster of Mohamed Morsi.

International leader Mohamed Mustafa ElBaradei was born on June 17, 1942, in Cairo, Egypt, and eventually studied law as his father Mostafa had. ElBaradei graduated from the University of Cairo in 1962 and was a diplomat with the Egyptian Ministry of Foreign Affairs for a time, working with the United Nations in both Geneva and New York. In 1974, he earned his doctorate in international law from New York University.

ElBaradei married teacher Aida Elkachef; the couple went on to have two children.

From the mid- to late 1970s, Mohamed ElBaradei was assistant to his home nation's foreign minister; he subsequently took a position with the U.N.'s Institute for Training and Research as a senior fellow, and worked as an adjunct law professor at NYU. In 1984, ElBaradei joined the staff of the International Atomic Energy Agency as part of its secretariat, holding leadership positions that included legal counsel and external relations work. He was appointed the IAEA's director general in late 1997, and would go on to be elected for two additional four-year terms, retiring from the organization in 2009.

ElBaradei became known for his insistence on a diplomatic approach when it came to potential nuclear proliferation in countries like Iran and North Korea, and critiqued certain ideas around nuclear armament held by leading first-world countries. He also went on record to state that his agency had found no evidence of weapons of mass destruction in Iraq, though the insistence that such weapons existed by U.S. President George W. Bush's administration was a major factor in the 2003 Iraqi invasion.

ElBaradei, along with the entire IAEA, was awarded the Nobel Peace Prize in 2005 for his work in helping to foster nuclear disarmament and more responsible usage of nuclear energy in non-defensive industries. The following year, he received Egypt's Greatest Nile Collar, the country's highest commendation, from President Hosni Mubarak. In the vein of the work for which he's widely recognized, ElBaradei later released the book The Age of Deception: Nuclear Diplomacy in Treacherous Times (2011).

Leading Figure in Time of Unrest

After leaving the IAEA, ElBaradei returned to his home country in 2010. He opposed the Mubarak regime, calling for the country to have a truly democratic government and forming the National Association for Change. He was placed on house arrest in early 2011, yet still joined protesters in Tahrir Square who looked to overturn Mubarak's government.

With the military assuming control, Mubarak stepped down from power in February 2011 and was arrested. Then, in June 2012, Parliament and Muslim Brotherhood member Mohamed Morsi was elected to the presidency, with the leader subsequently making grabs for power and control that outraged many. By the summer of 2013, a wave of anti-Morsi protests spurred another military takeover, and he was removed from the post.

ElBaradei, who had spoken to President Barack Obama and Secretary of State John Kerry about the perils of Morsi's leadership, has continued to call for nonviolence as the country has seen new bloodshed, as well as for an orderly process that would result in fair parliamentary elections. His name was floated as a potential interim prime minister, but as of July 9, 2013, economist Hazem el-Beblawi was appointed to the position by acting head of state Adli Mansour, with ElBaradei appointed vice president for foreign relations.