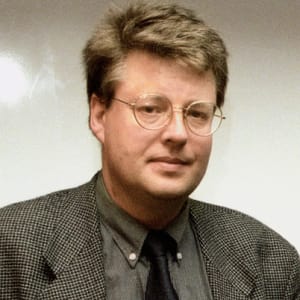 Stieg Larsson was the Swedish author best known for his Millenium novels, including The Girl with the Dragon Tattoo.

Born in 1954 in Sweden, Stieg Larsson was a lifelong leftist, and a journalist for anti-fascist and communist publications. It was his fiction writing, however, that propelled Larsson to fame. The Millenium trilogy, starting with The Girl with the Dragon Tattoo (2005), became international bestsellers, adapted into films in Sweden and the United States. Larsson didn't live to see the enormous success of his novels— he died of a heart attack in 2004, but his books still top the bestseller lists.

Novelist. Born Karl Stig-Erland Larsson on August 15, 1954 in Skelleftehamn, a small town in the Vasterbotten region of northeast Sweden, about 400 miles north of Stockholm. For the first nine years of his life, Larsson was raised by his maternal grandparents. He would later cite his grandfather, a committed political activist who had been imprisoned during World War II for opposing the Nazis, as an especially influential role model. Larsson's grandfather passed away, however, when Stieg was only nine years old, at which time the boy moved in with his father, Erland Larsson, and his younger brother Joakim.

Stieg Larsson's favorite childhood pastime was reading, especially favoring the works of the English children's writer Enid Blyton and of Astrid Lindgren, the Swedish author of his favorite book, The Adventures of Pippi Longstocking. Larsson's parents were also avid lover of fiction, particularly fond of the crime novels of Maj Sjowall and the detective fiction of Mickey Spillane, both authors who would leave strong imprints on Larsson's later writing. Before long, Larsson began writing his own stories; at the age of 12, he completed his first attempt at writing a novel. "When Stieg was 12 I read a novel he had written in a notebook," his father later recalled. "It was then that we gave him a typewriter—it was his thirteenth birthday and I remember it was very expensive at that time. It was also very noisy, so we had to make space for him in the cellar. He would write in the cellar and come up for meals, but at least we could sleep at night."

Coming of age during the Vietnam War, Larsson set aside fiction during his adolescence to focus on politics and journalism. "Stieg was young and leaning toward the Left," his father later recalled. "In Sweden at the time, in every town in Sweden, on every Saturday, young people would be marching shouting, 'Out of Vietnam!' Stieg was one of those young people, and he started writing about the Vietnam War." His parents were also deeply political—his father was a Communist and his mother was a prominent Social Democrat. Stieg Larsson's father said, "We discussed politics at some length at the dinner table. When Stieg was fourteen I found myself losing an argument in a discussion with him. He just had better arguments than his mother or I."

In fact, it was at a 1972 anti-Vietnam protest rally that an 18-year-old Larsson met a young woman named Eva Gabrielsson. Gabrielsson was an architectural historian and, like Larsson, a political activist. The two quickly fell in love. Although they were never married, Larsson and Gabrielsson remained together for the rest of his life.

In 1975, at the age of 21, Larsson joined the Swedish army to fulfill his two years of compulsory military service. Larsson did not back off his left wing political activism just because he joined the military. While serving in the army, he smuggled the Trotskyist magazine Red Soldier into the barracks, and upon his discharge he traveled to East Africa, where he helped train female Marxist guerillas in Eritrea to use grenade launchers.

Following this military interlude in his life, Larsson returned to Sweden and settled down with Gabrielsson in Stockholm. There he began researching right wing extremism, specifically the lingering pockets of neo-Nazism, racism and sexism he found in Sweden and the world at large. In the early 1980s, Larsson became the Scandinavian correspondent of Searchlight, a British magazine dedicated to anti-fascism and anti-racism. He also worked as an editor for Fjarde Internationalen, the journal of the obscure Swedish branch of the Trotskyist Fourth International. In 1995, as a white-power music scene reached its peak in Sweden, Larsson helped found the Expo Foundation, an organization dedicated to combating right wing forces in Swedish society. Larsson served as the editor of Expo magazine, which provided a model for the fictional Millennium of his later novels.

Before he ever conceived of the Millennium novels, Larsson had already lived a noteworthy life as a political activist and journalist and had achieved a modicum of fame and notoriety among Sweden's politically aware. Still, Larsson had never abandoned his childhood passion for science fiction and crime fiction, and during the 1990s he drafted a trilogy of crime novels now known as the Millennium Trilogy, whose original Swedish titles translate to Men Who Hate Women, The Witch Who Dreamed of a Can of Petrol and The Exploding Castle in the Air. The books were published to considerable success in Sweden before being picked up by the small British publishing house Quercus and released under new English titles: The Girl with the Dragon Tattoo (2005), The Girl Who Played with Fire (2006) and The Girl Who Kicked the Hornet's Nest (2007).

The trilogy revolves around Lisbeth Salander, a young computer hacker with a punk style whom Larsson described as his conception of a modern young-adult Pippi Longstocking, and Mikael Blomkvist, a celebrated investigative journalist whose personal history loosely mirrors Larsson's own. Throughout the trio of dense, intricate and suspenseful novels, the pair team up to take on a serial killer with a deranged hatred for women, a Swedish sex trafficking ring and a rightist conspiracy within the Swedish security service. The novels have become enormous international bestsellers; with total sales of the Millennium Trilogy surpassing $40 million, Larsson is on pace to join J.K. Rowling, Stephanie Meyer and Dan Brown among the bestselling authors in recent history.

Unfortunately, Stieg Larsson is not here to enjoy his novels' staggering success. In a story that rivals his fiction for its mystery and intrigue, Larsson died suddenly at the age of 50, on November 9, 2004, before any of his bestselling novels ever saw print. While conspiracy theories abound that one of Larsson's many political enemies played a part in his death, the official story remains the most plausible: Larsson died of a massive heart attack when he climbed the seven flights of stairs to his office because the building's elevator was broken. He was known to be in poor health. One of his publishers, Christopher MacLehose, recalled, "He smoked over 60 cigarettes a day and was a classic workaholic. To say that he didn't give his body a chance almost understates the case. And like many driven men, he tended not to listen to the counsel of those around him—he was warned again and again that he should look after himself."

Because Larsson never wrote an official will (he did sign a will during his adolescence leaving all his property to the Communist Party, but it was not officially witnessed and therefore invalid), and because he never married his life partner Eva Gabrielsson, Larsson's estate legally belongs to his father and brother. Nevertheless, in a plot twist worthy of his novels, Gabrielsson has possession Larsson's laptop, which contains an unfinished draft of his fourth novel, and she refuses to turn it over to Larsson's family. She claims that he was estranged from his father and brother during the last years of his life (a claim they deny) and would not want the unfinished work published. The two sides have yet to come to any agreement in this ugly and very public struggle to control Larsson's legacy.

No matter the disagreement over his estate, all parties agree that Stieg Larsson was a brilliant crime novelist whose sudden and untimely death robbed the world of many more magnificent books. Larsson's Swedish publisher, Eva Gedin, summed up his life: "He was a difficult man, but brilliant and multifaceted. Many Swedes were aware of his bravery in tackling extremist organizations. He could be infuriating —and he certainly wasn't afraid of making enemies. But most of his enemies were well chosen; as for his friends and associates, frustration with him might result from the fact that he was clearly asking his body to do more than it could cope with."