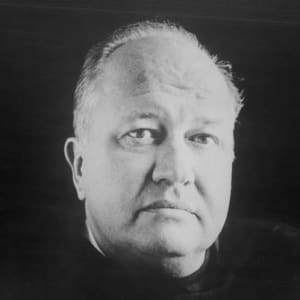 Poet and professor Theodore Roethke was best known for winning the 1954 Pulitzer Prize for his poetry volume “The Waking.” His other works include “Open House” and “The Far Field.”

Theodore Roethke was born on May 25, 1908, in Saginaw, Michigan. During his writing career, his major works included "Open House," "Words for the Wind" and "The Far Field." Roethke won won the Pulitzer Prize for his poetry volume The Waking in 1954 and the National Book Award in 1965 for The Far Field. He died on August 1, 1963, on Bainbridge Island, Washington.

Theodore Roethke was born in Saginaw, Michigan, on May 5, 1908. As a young boy, he spent many hours playing in a 25-acre greenhouse that his father and uncle owned, and the experiences he built there would influence much of his later writing. Another influence would emerge when Roethke was 14, when he got his first dose of tragedy. His uncle committed suicide and his father died of cancer—emotional events, especially paired with manic depressive episodes that struck regularly, that would help define Roethke as his life proceeded.

Deciding that he wanted to teach, Roethke eventually earned a master’s degree in English from the University of Michigan. But the stress of his discontent, and the exhaustion he felt from simply trying to live his life on his own terms, led to a mental breakdown in 1935, the first of several that eventually landed the poet in Ann Arbor’s Mercywood Sanitarium. During this period, Roethke’s first collection of poems was underway, and he worked on it for 10 years before he saw it published as Open House in 1941. The book was critically acclaimed upon its publication and put Roethke on the literary map.

Upon completion of his master’s, Roethke began teaching poetry at Michigan State, where he quickly became a popular professor. Despite his standing with his students, Roethke found that he was sacrificing himself for his work, neglecting his own creative needs to fulfill his academic duties. This only led to further depression, and he had his second breakdown in 1945.

The Major and Later Works

Roethke channeled the spirit of such transcendentalists as Emerson and Thoreau, but his work channeled his own childhood—his father’s greenhouse, in particular—and mindset heavily, making his poems entirely his own. He published books sparingly, but when he did critics took notice and his reputation grew. The two collections following Open House, The Lost Son and Other Poems (1948) and Praise to the End! (1951), were followed by the collection The Waking, which earned Roethke the Pulitzer Prize in 1954.

Roethke’s success led him to become friends with other poets, such as W. H. Auden and William Carlos Williams, and he also took on teaching positions at various colleges, such as Penn State, Bennington College and the University of Washington. Unfortunately, that success was tempered by ongoing mental illness, and he would suffer breakdowns more regularly as time went on.